February 2nd 1917
All lost balls belong to the club and are to be handed to the Committee
January 18th 1910
That £5 be allowed the greens committee for enlarging 1st green
December 20th 1910
It is desirable to increase the course to 18 holes. Put to the meeting and passed by 21 votes to 4
July 11th 1930
Secretary to write to J H Turner of Frilford Heath, James Braid, Walton Heath, J H Taylor and Harry Vardon
September 14th 1931
"The new course had been measured. It was 6579 yards from back tees"
24th July 1929
As a trial, on a busy Sunday from 2 o'clock to 8 o'clock we employ a uniform policeman to patrol from the 12th green to the 7th green.
A proud history
and an even brighter future
Era 1: 1895 to 1906

Golf was first played in Dunstable in 1895. A few enthusiasts, mainly connected with Dunstable School, had their own small private club on a 9-hole course in The Park behind the school. As with many historic courses at that time, the course was rather rudimentary in design, construction and maintenance. Despite the conditions being somewhat primitive it is also clear from reading press articles from the day just how popular the game was and would become. The standard of play was so high that this small club held its own in matches with larger and more prestigious clubs. With demand for play growing, and when the land in the centre of town was required for other purposes, these early pioneers looked around and sought ways and means not only of continuing their small association, but of endeavouring to draw support from the immediate neighbourhood.

With the help of a few members of this old private club and the cooperation of certain prominent Dunstable townsmen, some twelve acres of land on the Downs were purchased, including an old public house known as ‘California’ which was the site of the original clubhouse. In November 1906, the Dunstable Golf Club was formed. “The course of nine holes, which varied in length from 100 to 500 yards, was laid out by Rowland Jones, runner up in the 1905 Open Championship, and is situated on the Downs at Dunstable, a mile and a half from the Great Northern Railway station."

The foundation of the club was due mainly to the efforts of E. E. Apthorp, (Captain of the Cambridge University team) C C S Benning, J Healing, (The first secretary) Arthur Staddon and L C R Thring.

It was not long before a nine-hole course was deemed insufficient so with the club leasing an additional 52 acres of land together with some waste land on the downs, the course was expanded to 18 holes in 1912. Part of this course was on the Common and five holes were on the ‘other’ side of Whipsnade Road. Pictured above is the 9th hole on the old course.

“It is hardly necessary in these modern motoring days to sing the praises of Dunstable Downs as a beauty spot: The Downs are known to most people in the Home Counties as a glorious view point over at least three counties. The Dunstable course is situated on the summit of the Downs, nearly 800 feet above sea level, and a day’s golf in the bracing air is a real tonic to the most jaded town dweller. In the hottest summer the turf retains its springiness and the greens their freshness, and the views are almost too attractive for the golfer who desires to concentrate.” 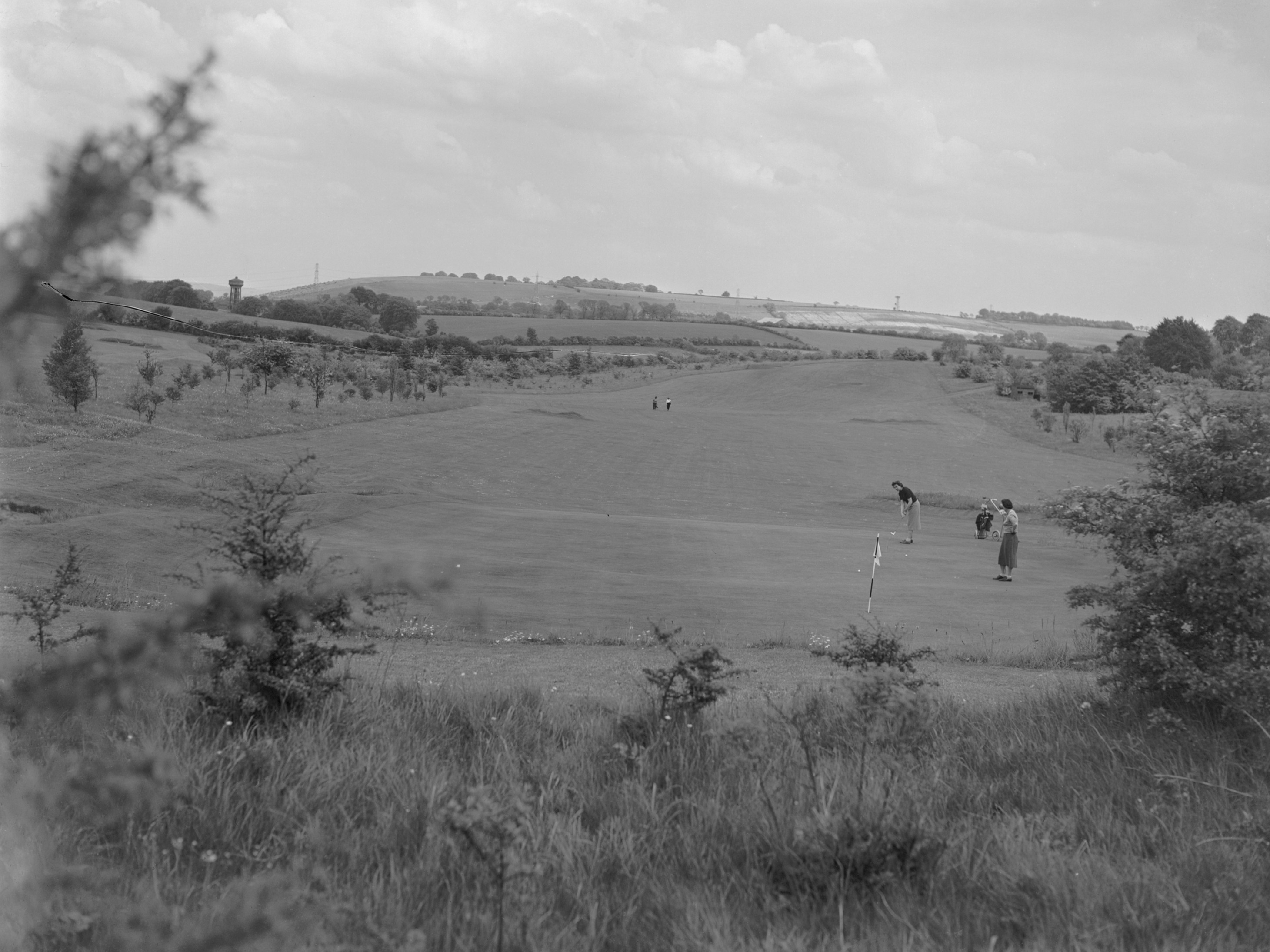 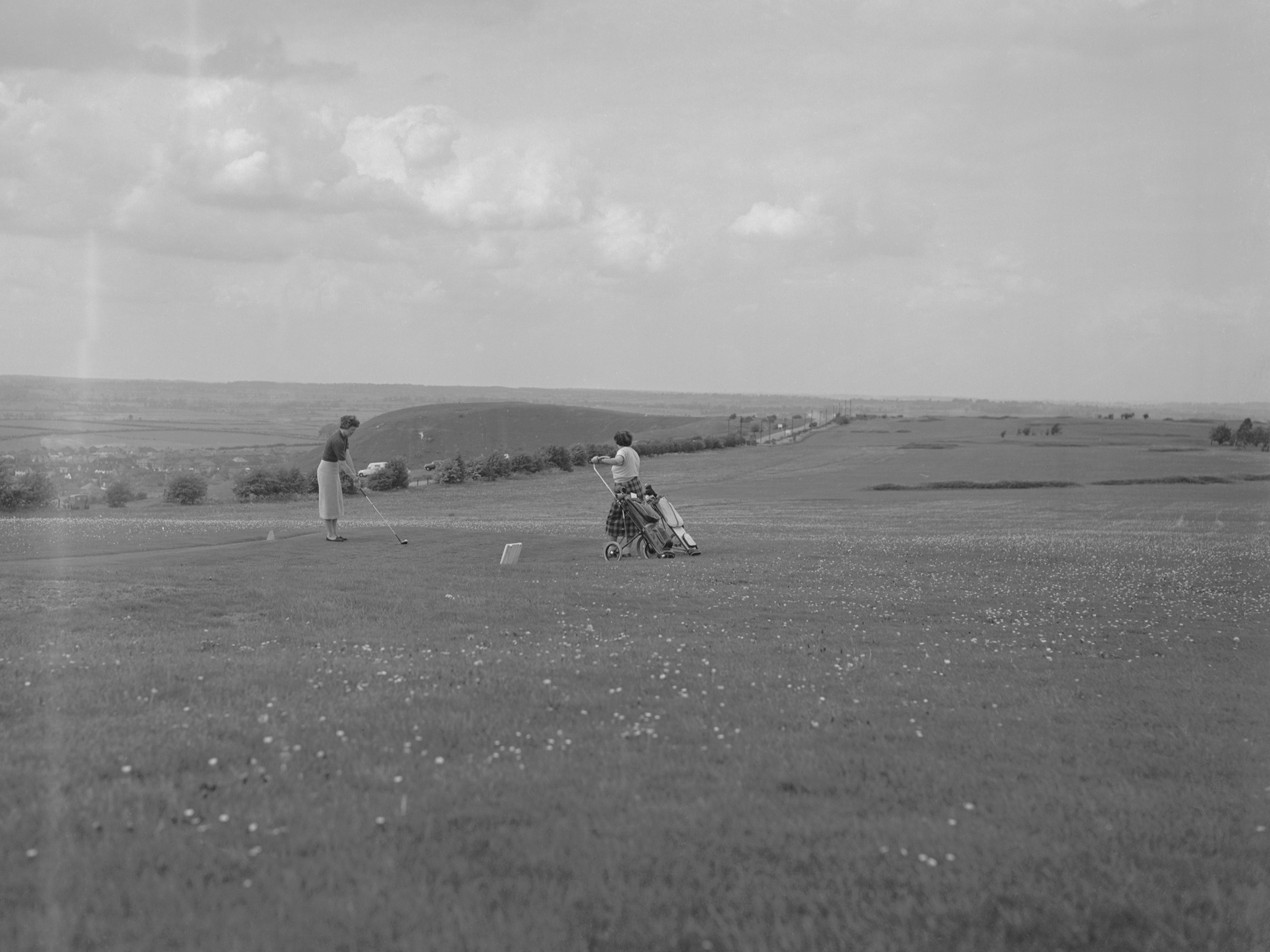 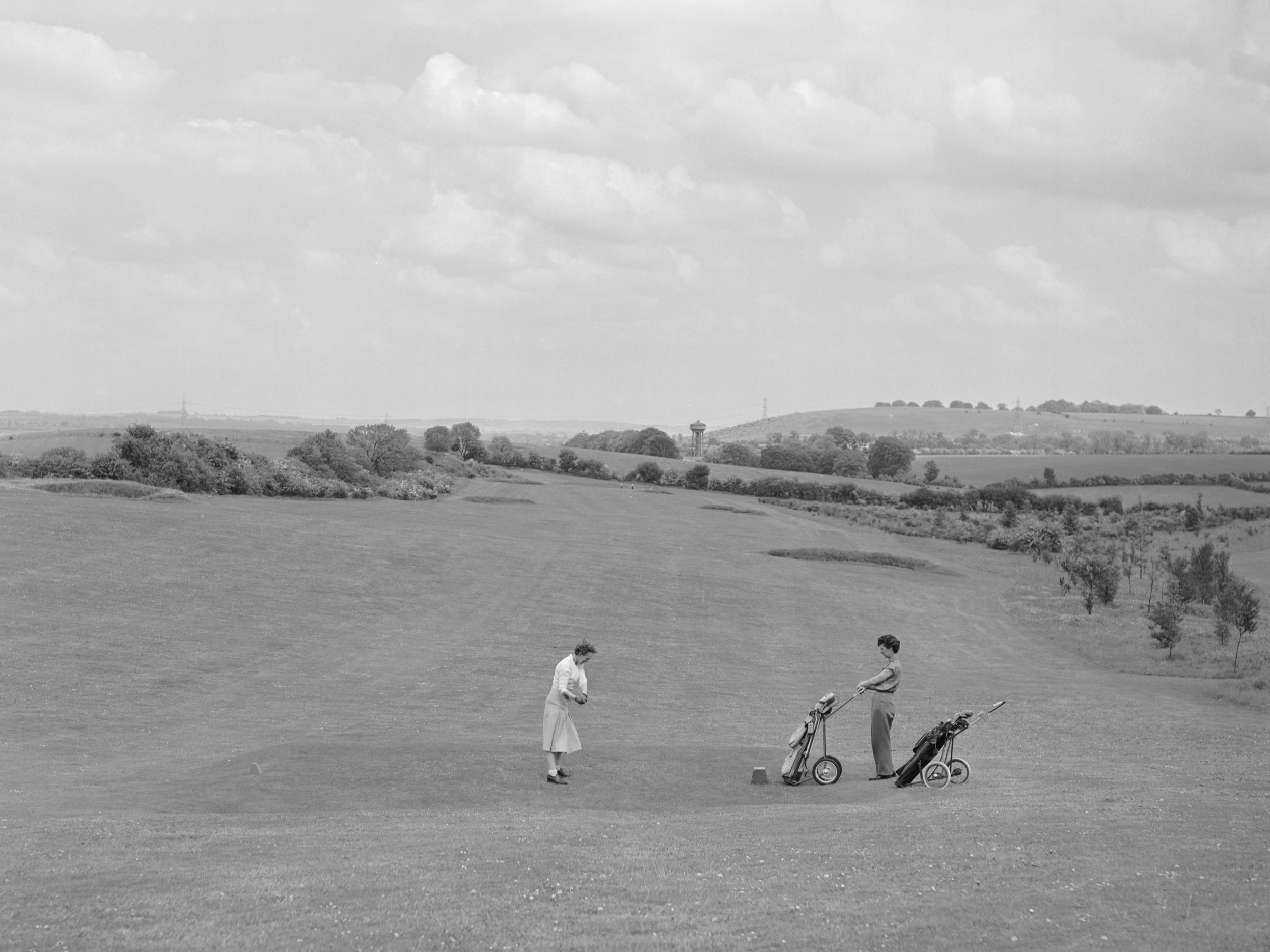 The growing popularity of the Downs as a view point and pleasure resort and the increased traffic due to the establishment of Whipsnade Zoo made revisions to the layout inevitable. It was said at the time...

“During fine weekends with lines of motor cars on the roadway, with thousands of nature lovers on the hill sides with gliders hovering overhead, it became next to impossible for golfers to play the holes on the public side of the road. Furthermore, there was no recognised boundary to the golf course and the public assumed it all to be common land. It was not unusual for them to park their cars and appear on the fairways to enjoy their picnics and play their games of cricket.”

The Club seized the opportunity to purchase Downs Farm in February 1930, give up part of the original course on common land and in the spring of 1930, asked James Braid, five times Open Champion, to redesign the course. See his original design below

Early in 1931 Braid came to inspect the construction work and made two minor modifications to his original plan. The new course was opened without ceremony on the 26th September 1931, its yardage being 6579, longer than today.

With a new clubhouse being constructed in the ‘centre’ of the course, Tom Moore, Club Secretary, was entrusted with the task of re numbering the course and overcoming some of the problems highlighted by the members of the day…excessive length on some of the holes and ‘strenuous climbing’ on others.

It is this layout that has provided the skeleton framework that has remained little altered ever since.

Dunstable's solution to the gauntlet thrown down by enhanced equipment technology was to subtly add back length to the golf course by adding new medal tees.

Safety concerns relating to the proximity of residential housing on the 3rd hole resulted in the tee being moved further back creating one of the counties longest and most challenging holes.

A key aspect of 2020 Vision is to be sympathetic to James Braid’s original design principles. Detailed study of his architectural principles in his book Advanced Golf first published in 1908, helped the team ensure the work being undertaken is in-keeping with his architectural style and philosophy.

The current Management Committee focus is now based on improving the quality of the course condition.

Benjamin Bennett II
One of the Club's early benefactors

Benjamin Bennett, who was Mayor of Dunstable in 1871 and 1872, was a prominent local businessman. His father, also named Benjamin Bennett, ran a hat factory in High Street North. Benjamin Jnr, who had trained as a lawyer, took over the business in 1865 when his father suffered a stroke. He expanded the business, bought a second hat factory in Luton and then went into the beer-brewing industry with great success. He purchased North-Western Brewery’s factory in Chiltern Road in 1887. Bennett’s Brewery, and its associated public houses, became very well-known locally. He died, childless, in 1911 and his widow provided the funds to create Bennett’s Memorial Recreation Ground in Bull Pond Lane.

Lionel Charles Reginald Thring
And a golfer too
1931 - Braid's original design
The original 8th and 10th greens. (Today's 6th & 8th holes) - Can you see the old beech tree at the back of today's 10th in the background?